Cricket World cup 2019 are almost few day away and there countdown are almost start. As per the World cup Schedule 1st Match starts on 30th May 2019 and ends on 14 July and In this period total 48 matches played between 10 Participating teams.The officials of ICC Cricket World Cup 2019 has chosen the best names of the umpires for the upcoming cricket world Cup 2019 and here we provide ICC World Cup 2019 Umpires names. This is the biggest tournament of Cricket so World cup Official are definitely select the best umpires for this big league.

Umpires role in the cricket are very important . Here is the entire list of the umpires for the mega event of Cricket world cup 2019. 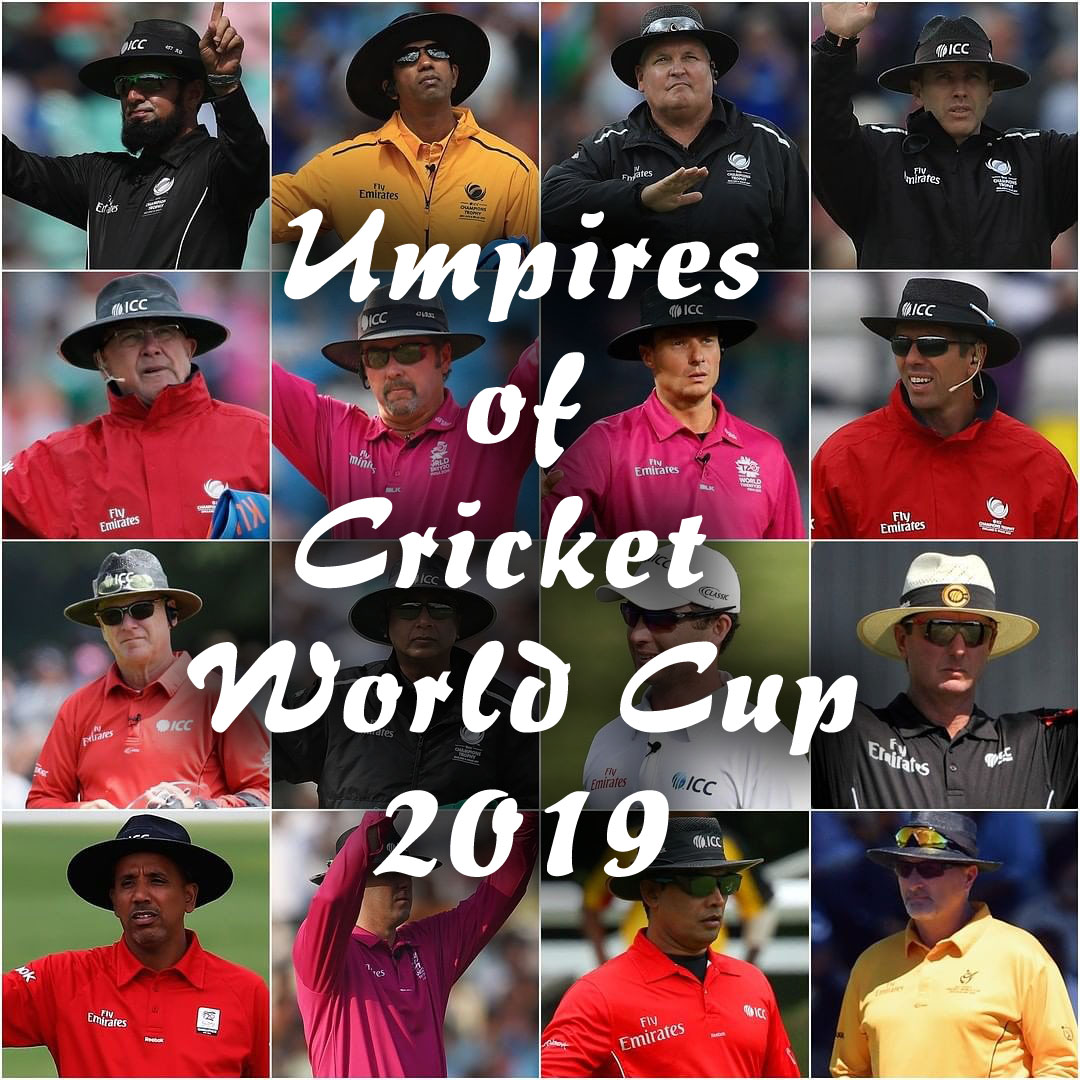 50 Years old of Pakistan team Aleem Dar is one of the Umpires of the ICC world cup 2019. He is a Member of the Elite panel of ICC Umpire. Aleem Dar who made his debut in the 2000 in the ODI Match between Pakistan and Sri Lanka on 16th february and since then they feature as a umpire in total of 125 Test Matches, 200 one day Games and 43 T20 international matches.

48 Year old Sri Lanka’s Kumar Dharmasena is pick for the ICC world cup 2019. He was great Off Break bowler of the SRi Lanka cricket team and with his great bowling performance sri lanka won the Title of 1996 cricket world cup. Dharmasena who made debut as a Umpire in 2009 and Since then they officiated as a Umpire in 60 Tests, 95 ODIs, and 22 T20Is.

South African 55 Years old Umpire of Marais Erasmus is pick for the world cup 2019. He is also a member of the Elite Panel of the ICC Umpires. He officiate first in the Cricket in 2006 T20 Match between South Africa and Australia. He also became the ICC umpire of the Year in 2017 and also get David Shephard Trophy for the second consecutive year. So far they feature as a umpire in 55 Tests, 82 ODIs, and 26 T20Is.

New Zealand 43 Year old Cricketer Chris Gaffaney is selected as a Umpire for the ICC world cup 2019. He started debut as a umpiring in 2010 September on a match against Canada vs Ireland. Since then He will be feature as a Umpire in 27 Test, 60 ODI and 20 T20 Matches so far.

61 Year old England cricketer who is also member of the ICC Elite Umpire Panel of Ian Gould is selected as a Umpire list in the ICC world cup 2019. Since Debut in the 3 Matches of 2007 cricket world cup they are officiated in 74 Tests, 135 ODIs, and 37 T20Is.

55 Years old England Cricketer Richard Illingworth is also pick in the ICC world cup umpire list. So far He will be officiated in the 42 Test Matches, 59 One day and 16 T20 games.

Another England Umpire of Richarge Kettleborough who is 46 year old is included in the world cup umpiring list as so far He featured in 58 Tests, 78 ODIs, and 22 T20Is as a umpire. He was elevated to the full International Panel of ICC Umpires in November 2009.

50 Years old Nigel Llong who is also member of the Elite panel of ICC umpire and he is selected in the world cup Umpires list. Llong who is featured in 56 Tests, 123 ODIs, and 32 T20Is so far as a umpire so very experience one.

Since the 2008 Nominated as a International Umpire of 59 Year old ?Bruce Oxenford has been included in the world cup umpire list. He has officiated so far in 55 Tests, 90 ODIs, and 20 T20Is cricket matches as a umpire.

Sundaram Ravi is Only one India Umpire who pick for the ICC world cup 2019. He is member of the ICC elite panel of Umpires. He has officiated in 33 Tests, 42 ODIs, and 18 T20Is so far.

Paul Reiffel Since the debut as a umpire in 2002 and also Member of the ICC international panel of the Umpires in 2008 are selected as a ICC world cup umpire list for the England and wales competition.

Australia Umpire of Rod Tucker who is member of the ICC Elite Umpire panel and so far in their Umpiring career feature in 67 Tests, 78 ODIs, and 35 T20Is are selected as a ICC world cup Umpire list.

Trinidad and Tobago’s 52 Year old Joel Wilson who has officiated in the 2015 world cup with the match of Australia and New Zealand since then they officiate in 13 Tests, 58 ODIs, and 26 T20Is Matches. He will be in the list of Umpire for the world cup 2019 tournament.

One of the young England umpire of Michael Gough also pick in the list of Cricket world cup umpire list for the 2019 competition. He has Umpired so far in the 9 Tests, 52 ODIs, and 14 T20Is

Sri Lanka former first class cricketer who made a debut as a umpire in 2011 in Match between Sri Lanka and Australia ODI at Hambantota. In the Umpiring career so far feature in 2 Tests, 71 ODIs, and 32 T20Is

With Experience of 23 ODI and 11 T20 in Umpire Australia’s Paul Wilson also selected as a ICC World cup 2019 in Umpires list.