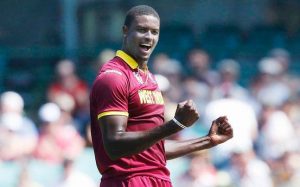 Two Time Cricket World cup Champions West Indies Who recently won the World cup trophy way back in 1979 which means around 40 years back. Current Captain of the Caribbean Team of Jason Holder satisfied with his team players performance and belief that Windies team capable to Win World cup Title once again in the 2019 cricket world cup.

In the interview with the sportsmail Holder said Team have good potential and good players who are easily takes the ICC world cup England to windies team.

“I’m very optimistic. I think we’ve got what it takes to win the World Cup. It’s just a matter of the [kind of] cricket we play. We’ve potentially got match-winners on any given day and we can beat any side in the world. We’re confident that once we formulate our plans and execute them, we’ll be up there lifting that trophy at the very end,” Holder said.

Under the Captainship of the Legendary Batsman Clive Lloyd Team won two ICC world cup and Jason Holder wants to repeat the history at England and wales this year. He admired Lloyd since childhood and He also taking inspiration from him time to time.

“Growing up, you track history. Clive Lloyd lifted two World Cups [in 1975 and 1979], and it’s up to us to try to achieve something similar. He and I are very close. He’s given me a lot of advice about how to go about my international experience. He always said to me that it took three years for him to understand how to play Test cricket. Having played Test cricket for a while, I realise what he meant,” he quoted as saying.

“Being in England, this was the last place we lifted the World Cup. Who knows, maybe there’s a script to be written there.”

In the cricket World cup Warm up Fixtures team Windies to Face South Africa on 26th May and against New Zealand on 28 May.

Windies to Play their opening Match of the World cup 2019 on 31st May against Pakistan at Trent Bridge venue.