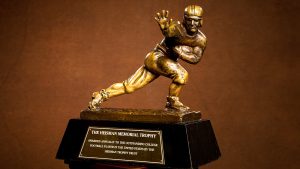 Heisman Trophy which is awarded every year to outstanding player in the NCAA football. Most recent 2019 Heisman Trophy winners is Senior Quarter back from LSU Joe Burrow.

Since the First Edition of 1935 so far total 77 Heisman trophy to be awarded to various team. The trophy which is one of the most sought-after awards in American collegiate athletics is named after John W. Heisman who was known as an athlete and inventive football genius.

Heisman Trophy given for Outstanding performance which best exhibits the pursuit of excellence with integrity. Winners epitomize great ability combined with diligence, perseverance, and hard work.