3rd September 1992 Born Sakshi Malik is an Indian freestyle wrestler. She born at Rohtak district of Haryana, in a village called Mokhra.

Sakshi made the proud for herself by winning the first indian female wrestler medal in the olympics. Sakshi won the prestigious Olympic bronze medal in the 58 kg category in the 2016 Rio Olympics.

She is a part of the JSW Sports Excellence Program, along with fellow female wrestlers Vinesh Phogat, Babita Kumari, and Geeta Phogat. her father Badlu Ram was motivated her to take up wrestling as he was also a wrestler. She began training in wrestling at the age of 12 under a coach, Ishwar Dahiya, at an Akhara in Chhotu Ram Stadium, Rohtak. 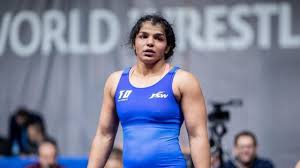 Malik’s Who get first success as a professional wrestler in the international arena came in 2010 at the Junior World Championships where she won bronze medal trophy in the 58 kg freestyle event. At the 2014 Dave Schultz International Tournament, she won gold in the 60 kg category. And after that, she never stopped and maintained the passion and dedication towards the game.

Sakshi best achievement came at the previously concluded 2016 Rio Olympics where she conquered her bouts against Sweden’s Johanna Mattsson, Moldova’s Mariana Cherdivara, but lost to Russia’s Valeria Koblova in the quarter-final game. But as Koblova reached the finals, which made Sakshi Malik eligible for the ‘repechage round’ ( in which the wrestlers who lose to the eventual finalists fight it out for the third place), where she won against Pürevdorjiin Orkhon of Mongolia in her first bout.