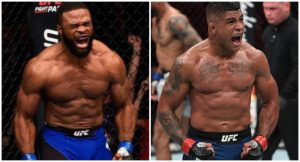 After a lots of time UFC May 30 Fight Card Main Events has been announced.

Former welterweight champion Tyron Woodley will be fight against Gilbert Burns on the 30 May. Burns who announced the UFC Fight of Burns vs Woodley on Twitter and ESPN confirmed the following with it.

Tyron Woodley (19-4-1) has not fought since losing his welterweight title to Kamaru Usman in March 2019. Prior to the loss, the 38-year-old had won seven fights in a row.

Gilbert Burns (18-3) is coming off the biggest win of his career, when he knocked out Demian Maia in March. He will come into the fight riding a five-fight winning streak.