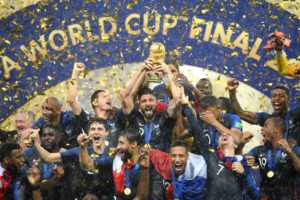 Football World cup Winners List : FIFA – Federation de International football association organized the football world cup on span of every four years. Inaugural edition of the Fifa world cup means first Football world cup will be held in 1930 which was host by the Uruguay and That tournament also won by the Uruguay national football team. Since then so far total 21 World cup has been organized by the Fifa and Next 22nd Edition of Fifa world cup is schedule to played in Qatar on 2022.

Look at below the Year by Year Each Fifa world cup Host Country, Winners, Runners up with final match score.

Upcoming 22nd Edition of the Fifa World cup Tournament to be schedule to played at Qatar from 21 November. You can download the Soccer world cup wallchart from here of All 64 Matches.

Who wins FIFA World Cup most?

With 5 Trophy on Kitty, Brazil is the Most Successfull Soccer World cup Team and only team who is participated in the every single Fifa world cup Events. Brazil Team win the World cup in 1958, 1962, 1970, 1994, 2002 year of tournament.

What teams have won the World Cup?

Brazil who won the Five titles of the trophy along with them the Football world cup winners team are Germany and Italy who win the four titles each, Argentina, France and Uruguay win two trophy while England and spain succeed to win one title each.