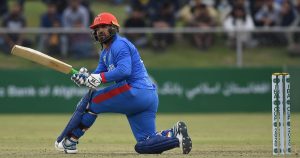 Afghanistan Cricket Board announced the 17 Member team for the upcoming Asia cup 2022 and one of the notable inclusion in team of veteran all rounder samiullah shinwari in the lineup.

Shinwari who most recently play for afghanistan team in T20 format two and half years ago in March 2022 against Ireland on the Covid-19 period. Now he return to Afghan squad for the asia cup tournament which to be played in UAE from the 27 August to 11 September T20 format.

Mohammad Nabi who lead the Afghanistan side in the Asia cup while Zadran, Hazratullah Zazai, Rashid Khan and Gurbaz are the key players for the lineup.

“The Asia Cup is an important event for us and, as such, we have picked our best available players for the event,” said chief selector Noor Malikzai. “Samiullah Shinwari is in very good form and can give further impetus to the batting department, which already boasts Ibrahim Zadran, Hashmatullah Shahidi, Najibullah Zadran and Mohammad Nabi. Shinwari has not played any international match since March 2020, but he has done well in the recently held Shpageeza Cricket League 2022 and demonstrated that he is a good option to strengthen our middle order.”

If we look at the fixtures of Afghanistan in Asia cup then its placed in Group B along with Sri Lanka anad Bangladesh.

Everton vs Nottm Forest Head to Head Stats, Who win Most Games

Leicester City vs Southampton Head to Head Stats, Who win Most Games